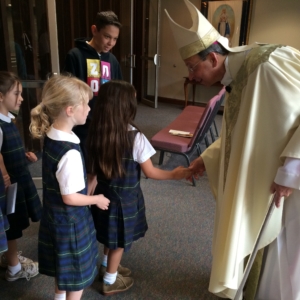 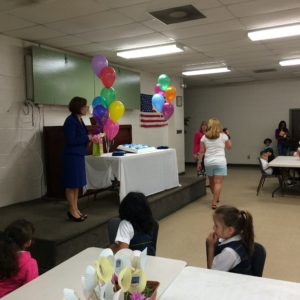 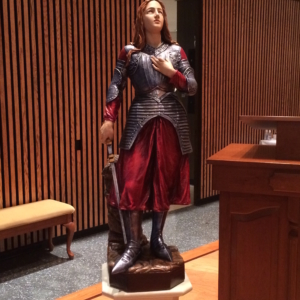 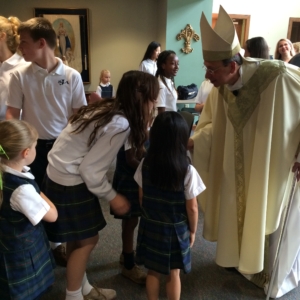 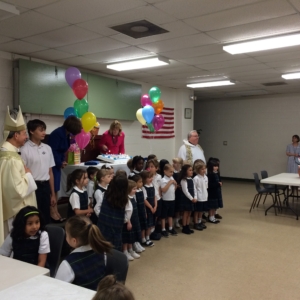 The Catholic Church in the Archdiocese of Baltimore experienced tremendous immigrant growth between 1940 and 1960. Birth rates were high and many converts joined the church. The number of families who moved into the Aberdeen Area to work on the Aberdeen Proving Grounds increased. The town's population grew from 1,525 in 1940 to 9,679 in 1960. St. Joan of Arc community responded to this growing need by building a rectory, convent, church, and school over a thirteen year period. A two floor structure was opened as both school and church in 1954. The Sisters of St. Casmir utilized the first floor to house four grades while the second floor was used as the church during the construction of the new church site. By 1966 when the new church opened, the school had grown to include one class each of First through Eighth Grade.

In 1993 a new two story wing was added to the school. The first floor new section is home to the Pre-Kindergarten and Kindergarten classrooms. The second floor houses the Fourth through Eighth grade classrooms and a Media Center (library/computer lab). An elevator was added to the wing to make the building accessible to a greater number of students, families, and parishioners.

There have been numerous changes over the 61 year history of the school. Originally the school primarily served the families of the Aberdeen area. Today however, the school services the needs of families throughout the Eastern part of Harford County. St. Joan of Arc School is one of two Catholic elementary schools located in the Harford County region in the Archdiocese of Baltimore. The school which began with a faculty made up completely of religious sisters now consists of a lay faculty of men and women. In 1997 the two remaining sisters left and the first lay principal was appointed. The dedicated lay faculty is committed to carry out its mission.

The adoption of several new academic programs and the expansion of the middle school concept presented more space challenges. Therefore, the school was increased in size again in 1999 with the addition of a modular unit. In 2008 St. Joan added a new central heating and air-conditioning system.

The Archdiocese named SJA a STEM school in 2011. In 2012 a LabLearner Science Lab was added to enhance the STEM curriculum. Technology is fully integrated into the curriculum through the daily use of interactive Smart Boards in all classrooms, two mobile iPad carts, school wide wireless Internet access points, as well as one-to-one chromebooks from 4th through 8th grade..

The addition of an Innovation Lab in 2015 provides an area for engineering projects and video productions. A state of the art playground was opened in the fall of 2016. Adding a MakerSpace to the Innovation Lab enhances the STEM program. An additional multipurpose room and expansion of the preschool are planned as St. Joan of Arc continues to improve the campus to better meet student needs.

St. Joan of Arc was recognized as a STEM school by the University of Notre Dame of Maryland in 2017 and accredited as a STEM School by AdvancEd in 2018 based upon rigorous STEM standards. SJA was the first school in Maryland to receive this accreditation.

Located in Aberdeen, Maryland St. Joan of Arc School is a private Catholic school for students in preschool through Eighth grade. To learn more about our school and the admissions process for the upcoming school year we encourage you to schedule your private tour today.