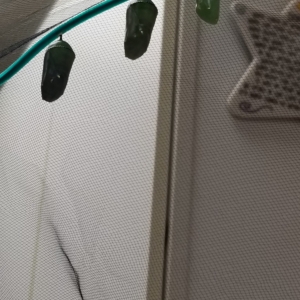 Now that our Monarch Butterfly Garden is fully established, we have had many monarch butterflies visiting and laying eggs. Our entire school has become involved in the Monarch Watch citizen scientist project.  Classrooms have been raising monarch caterpillars found in our butterfly garden.  Once they become butterflies, we tag and release them.

Tagged monarchs observed or recovered in the United States, Canada, and northern Mexico are often found by people who are not familiar with the Monarch Watch tagging program. They are directed to submit the recovery information (complete tag code, date, location, and contact info) via the Monarch Watch Tag Recovery Form so that it may be added to the database.  We will then receive a certificate letting us know of the monarch’s sighting or recovery.  The majority of the recovered tags are obtained from central Mexico.
We are also working with Project Monarch Health to monitor the butterflies for  ophryocystis elektroscirrha, or OE. OE is a parasite that infects monarchs and some other butterflies. It is a single-celled organism known as a protozoan, a living thing that has many of the same characteristics as animals. OE must live within a host to grow and multiply. However, when it is not inside a host, OE survives in the environment as spores, which are resistant to extreme conditions. OE was first discovered infecting monarch butterflies in Florida in the late 1960s. It has since been found in all other monarch populations world-wide. This large range leads scientists to believe that this parasite has evolved alongside monarchs. OE spores are dormant cells found on the outside of infected monarchs. These tiny spores are sandwiched in between the scales that cover a butterfly’s body. The greatest concentration of spores usually occurs on the abdomen.  Once we tag a butterfly, we collect a sample from his/her abdomen by using a small piece of tape.  These samples are labeled and will be sent to Project Monarch Health for analysis.  Prior to sending, we have looked at some of them under microscopes ourselves and have found only one with evidence of OE.